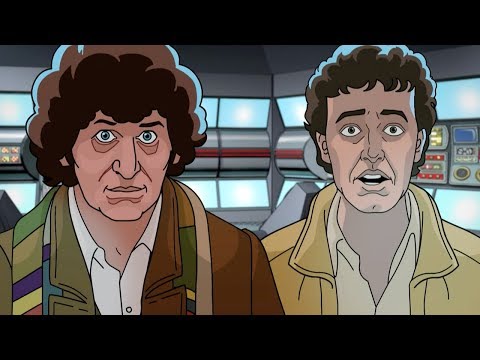 Tom Baker returns as the Fourth Doctor in a previously unbroadcast story, combining original live-action footage with hand-drawn animation. To be released on DVD, Bluray and digital download.

In 1979, Shada was set to be the celebratory end to the seventeenth series of Doctor Who. Critically acclaimed writer Douglas Adams had completed the script, Tom Baker’s Doctor was at the height of his popularity, and the series had bigger audiences than ever before. But strike action at the BBC in November 1979, meant the studio scenes were never completed and the adventure was abandoned. The story became legendary among fans.

Now, thirty-eight years on, BBC Worldwide has announced that Shada, is to finally be completed, combining the original, remastered footage, with brand new colour animation to complete the story. The animation will feature the newly-recorded voices of the original cast, including Tom Baker as the Doctor and Lalla Ward as Romana, performing the original script. Shada will be released as a digital download on Friday 24th November, and on DVD and Bluray on Monday 4th December.

Tom Baker says, “Shada was one of my favourite Doctor Who stories. I have many fond memories of shooting the location scenes in Cambridge, and it was disappointing not to finish the story in studio. I’m so glad that BBC Worldwide have found a way to bring fans a complete visual version.”

The new feature-length production incorporates all of the live-action scenes from 1979, together with new animated material. Shada finds the Doctor in Cambridge working alongside companion Romana and retired Time Lord, Professor Chronotis, to defeat the evil alien Skagra who is attempting to steal the secrets to the prison planet, Shada.

Doctor Who: Shada is being produced by the team behind the highly successful and critically acclaimed animation of lost Doctor Who episode, The Power of the Daleks and lost Dad’s Army episode A Stripe For Frazer . The team have had access to nearly seven hours of raw footage from the original 1979 Shada shoot from which they are editing the new production from scratch, with all the original film negatives re-scanned in full HD and digitally remastered.

Paul Hembury, Executive Producer, BBC Worldwide says, “Fans loved The Power of the Daleks, so we’re delighted to be able to complete and bring them another lost Doctor Who classic.”

Doctor Who: Shada will be released as a digital download on Friday 24th November, and then on DVD and Bluray on Monday 4th December.